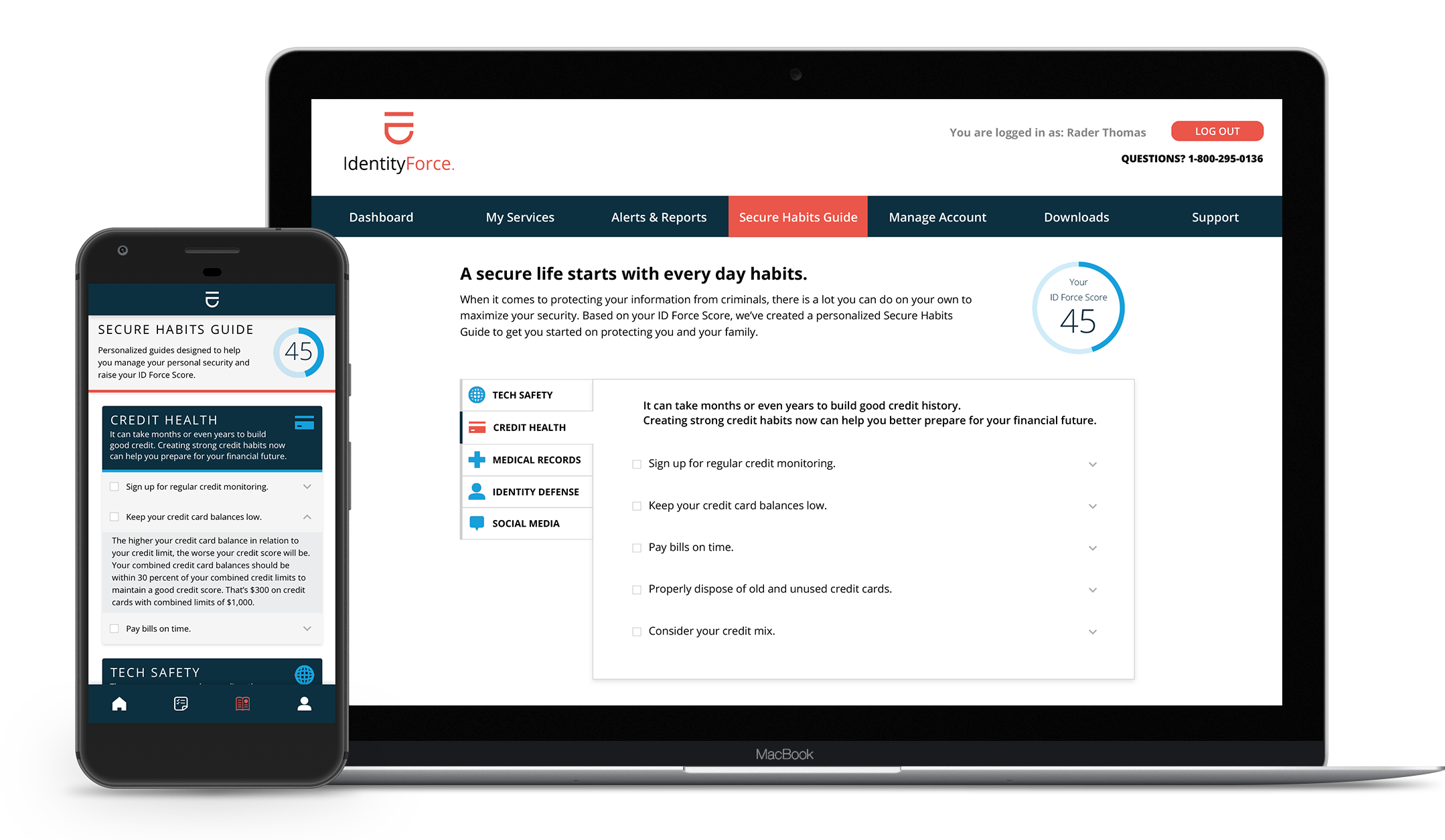 Identity Force is a subscription-based identity theft and fraud protection service. Subscribers receive a variety of reports related to their identity details, as well as alerts if anything is amiss.

The majority of Identity Force's main value proposition is locked behind a pay wall. Their website provides a wealth of educational content, but the amount of info can feel intimidating to users who don't quite understand how to apply it to their own lives.

Users who didn’t feel ready to commit to a subscription plan needed a way to engage with Identity Theft and better understand why their service was a worthwhile investment.

Our team designed a free user flow that would assess their risk of identity theft and provide useful and actionable tips to help a user protect themself. It would also create an incentive for the user to improve their habits, giving them an opportunity to receive a discount on a subscription. 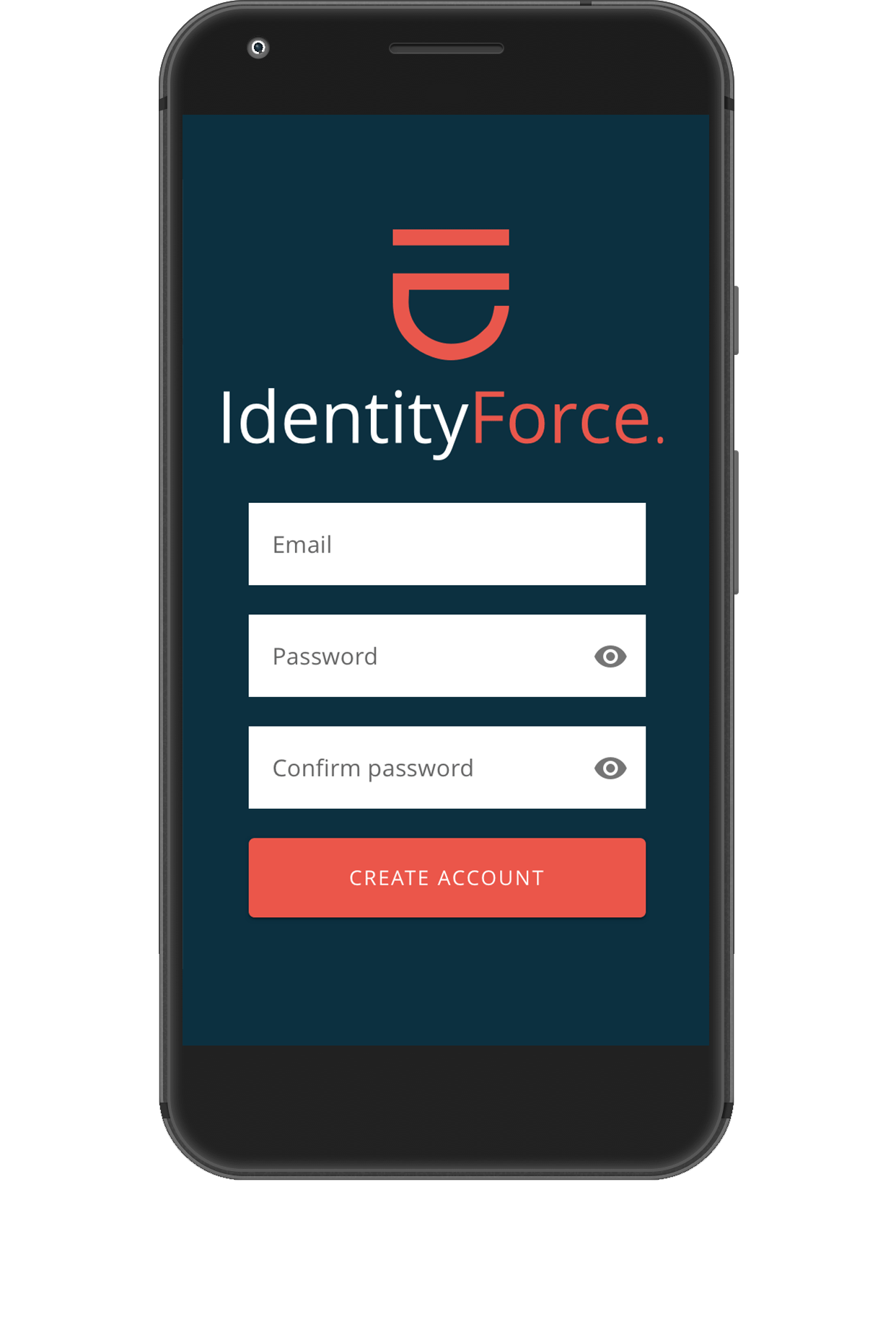 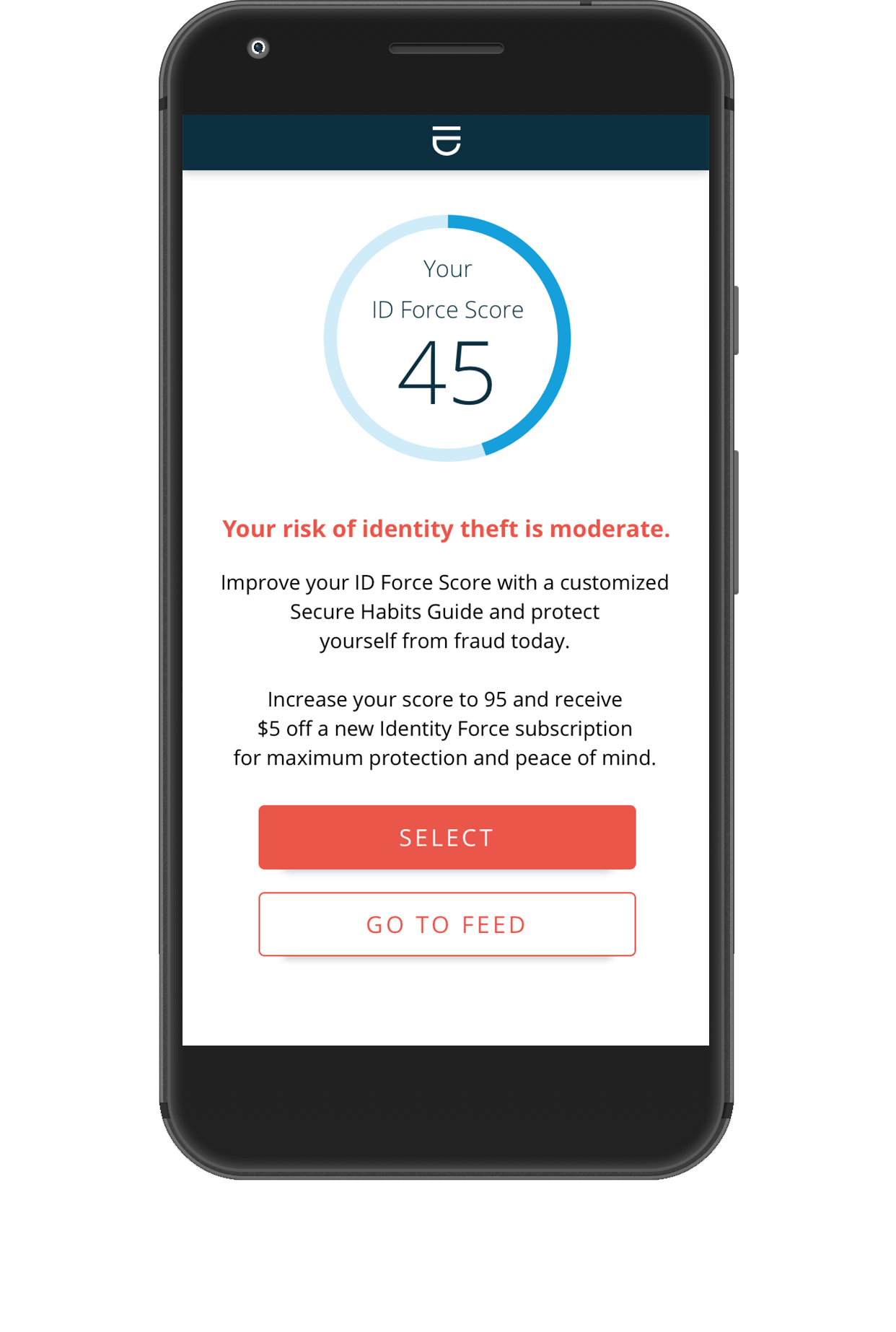 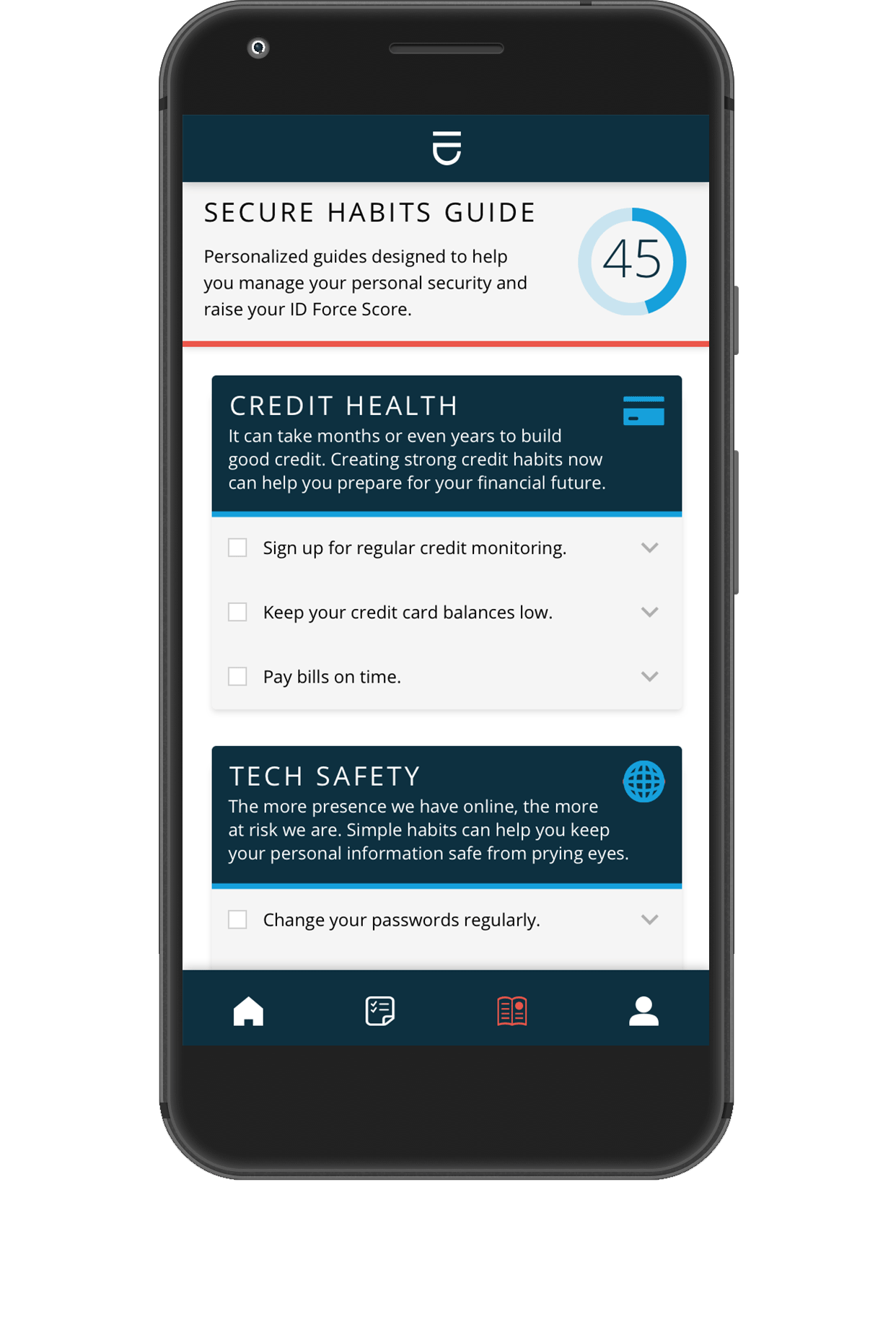 A couple of the biggest challenges our team faced was that we didn't have access to their mobile app (since all features required a paid subscription) and we were relatively inexperienced in the world of identity theft and fraud.

To help inform our design decisions, we sought out customer reviews for Identity Force and surveyed our networks to understand where our largest opportunities lied.

We knew that identity theft and fraud can be devastating life events, but how willing is the general public to invest in a protection service?

Our hypothesis was that identity theft and fraud was not an issue that was top of mind for the 20-39 demographic; these are the users we encountered who claimed they never would pay for a protection service like Identity force.

However, in reviewing FTC data on reported cases of identity theft, we were surprised to see that over the last 5 years, the number of cases reported by consumers age 20-39 steadily increased, while cases from consumers age 50-69 declined.

This hit close to home for our team, suggesting that more and more consumers our own age were victims of fraud and identity theft. 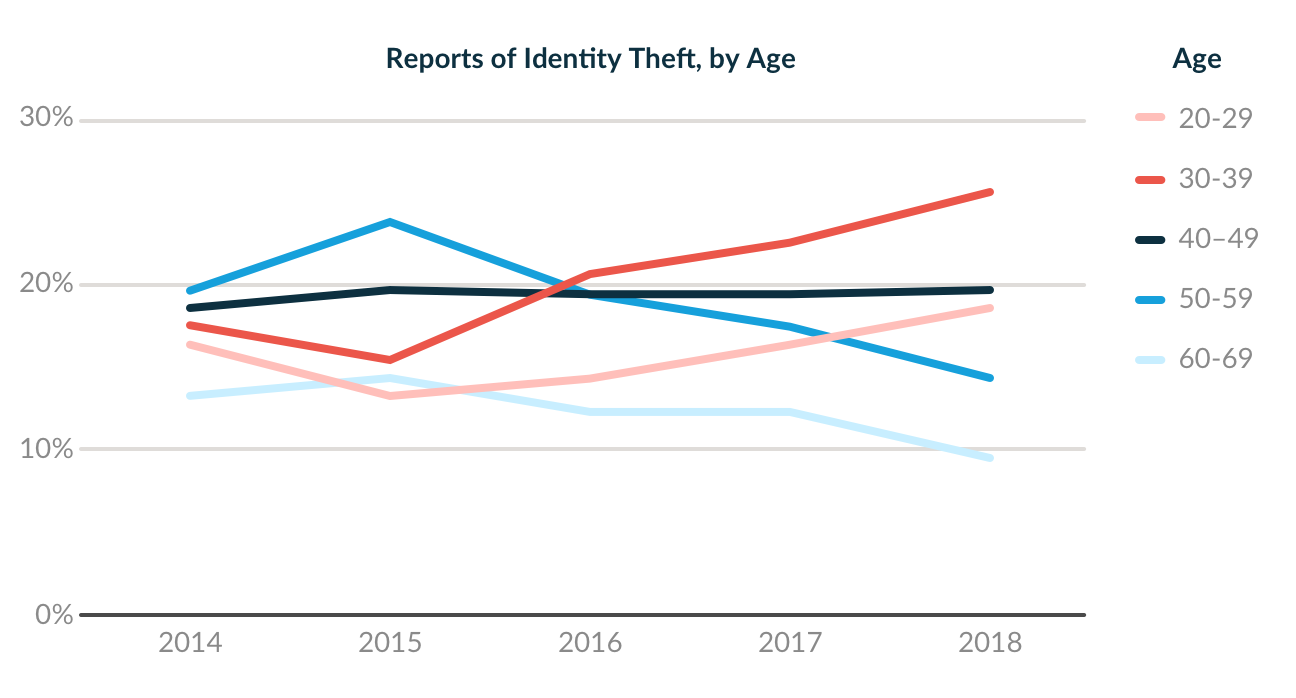 The idea that identity force and fraud incidents were more common than we thought was reinforced by survey results we received from our personal network. 98% of respondents had experienced some form of identity theft or fraud, but only 8% subscribed to a protection service like Identity Force.

When asked if they'd be interested subscribing to a service like Identity Force, almost every respondent flatly said, no. Why?

Their reasoning echoed some of the pain points of existing subscribers — they had no idea if it would work for them, and also, it never seemed like a problem until it happened to them. Most respondents and interviewees lacked the education to understand why fraud happened to them, or what they could do to protect themselves.

What were our product goals?

Creating a free flow from the ground up.

With the wide number of paths we could take, our team conducted a design studio to determine what features to prioritize. 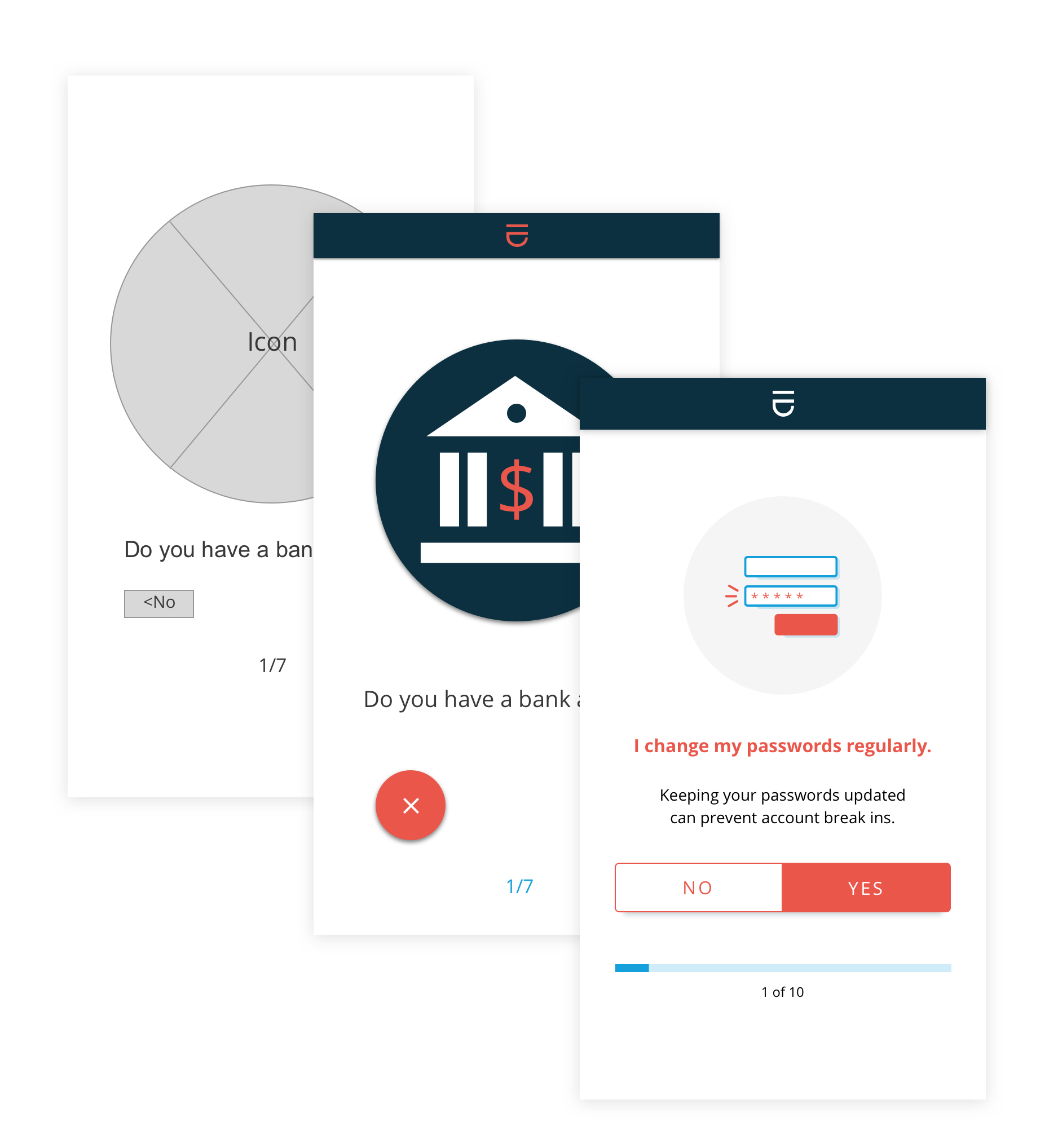 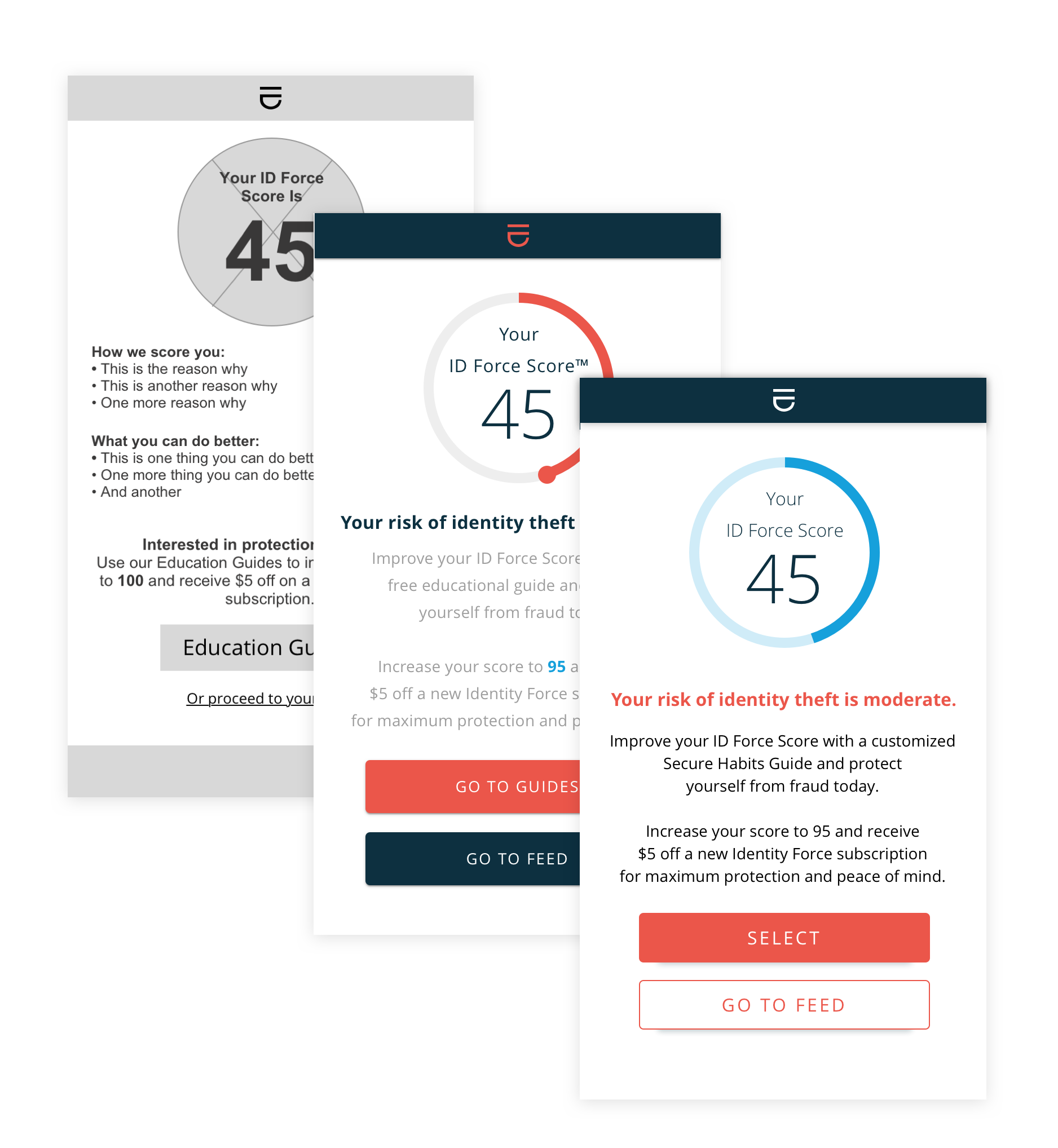 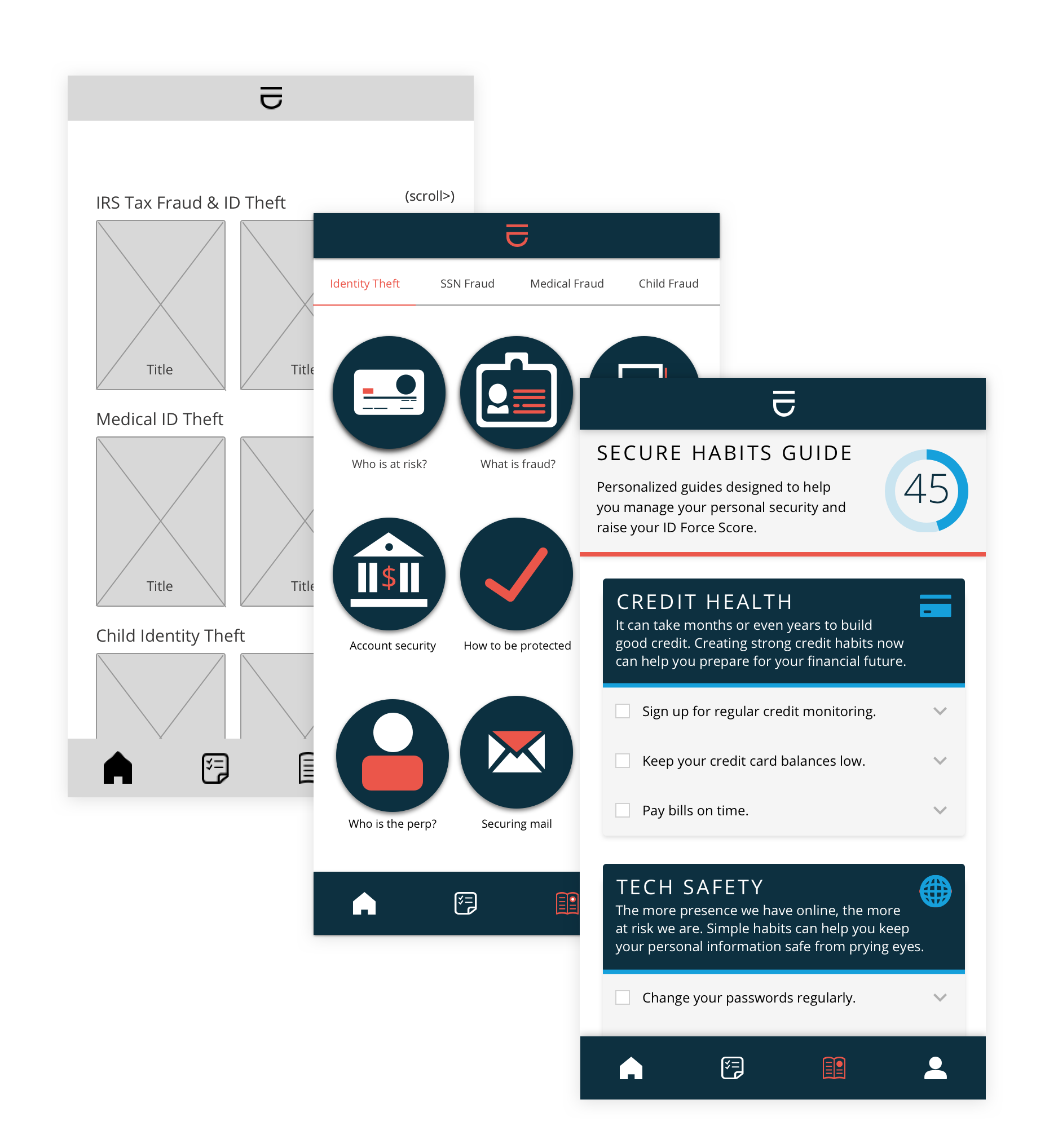 Next, I integrated the non-paid user flow into Identity Force's existing website. Given that we designed the mobile app from scratch, one of my biggest challenges as was to ensure that the branding and experience felt aligned when incorporated into the desktop website. 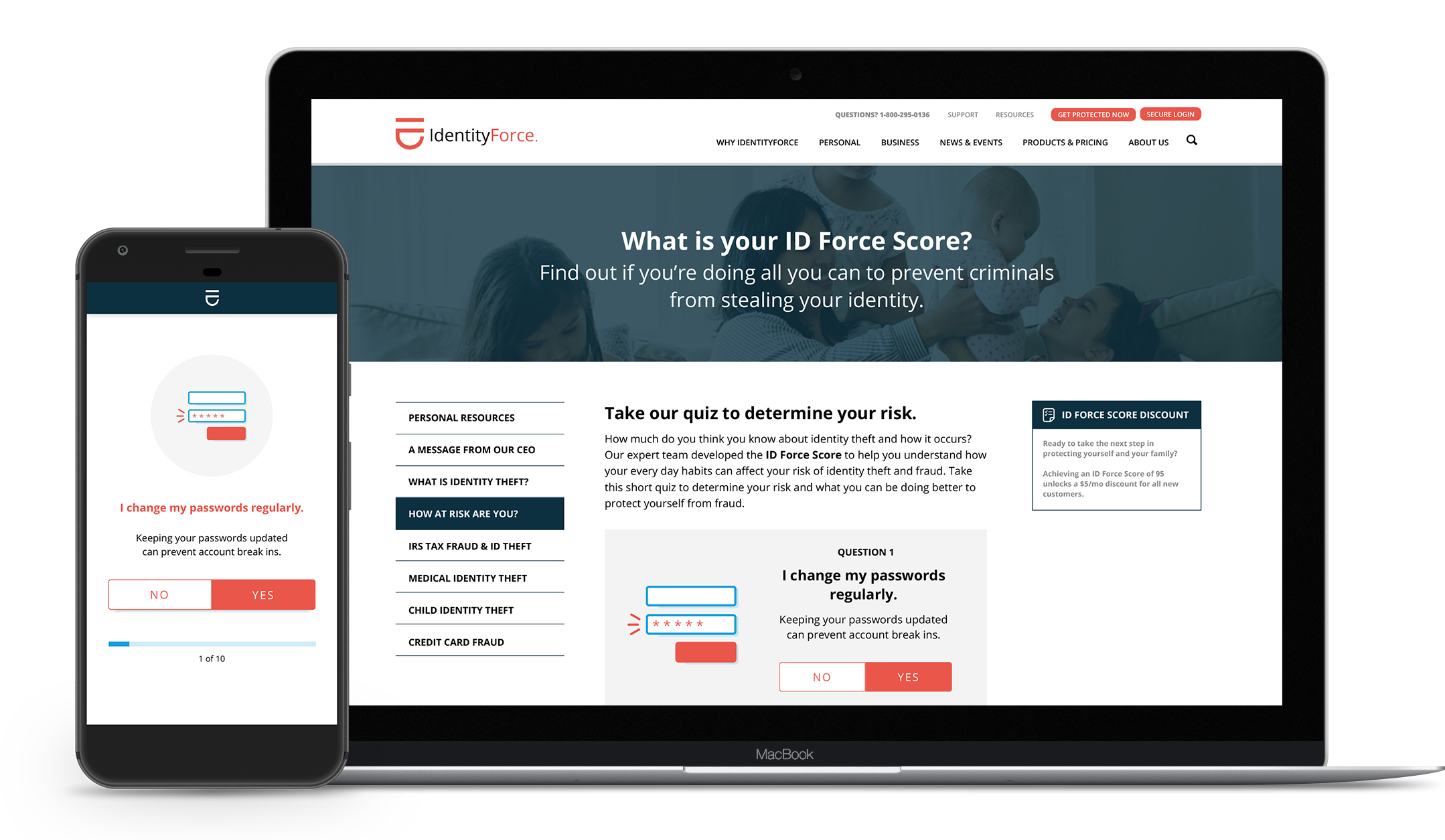 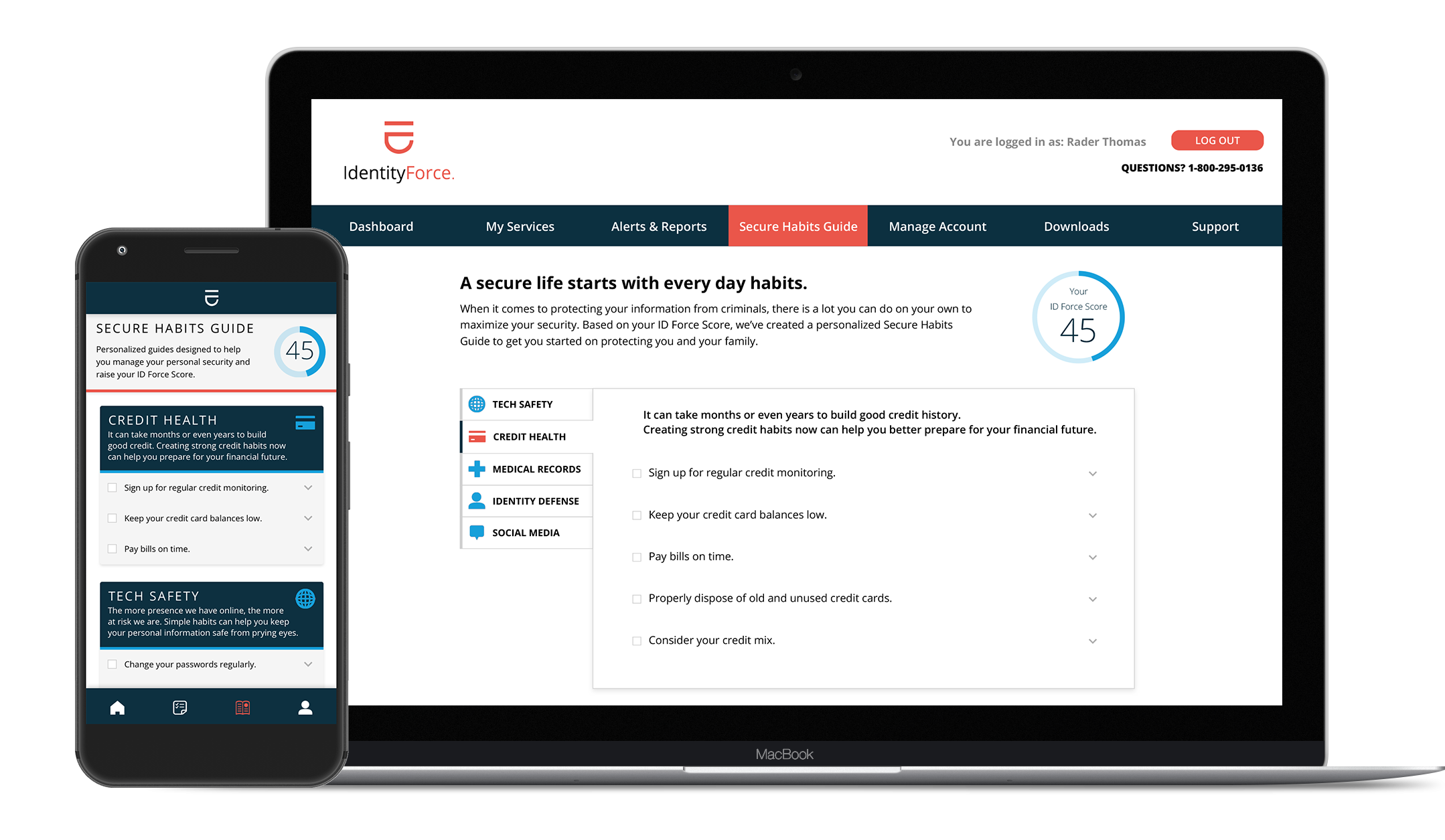 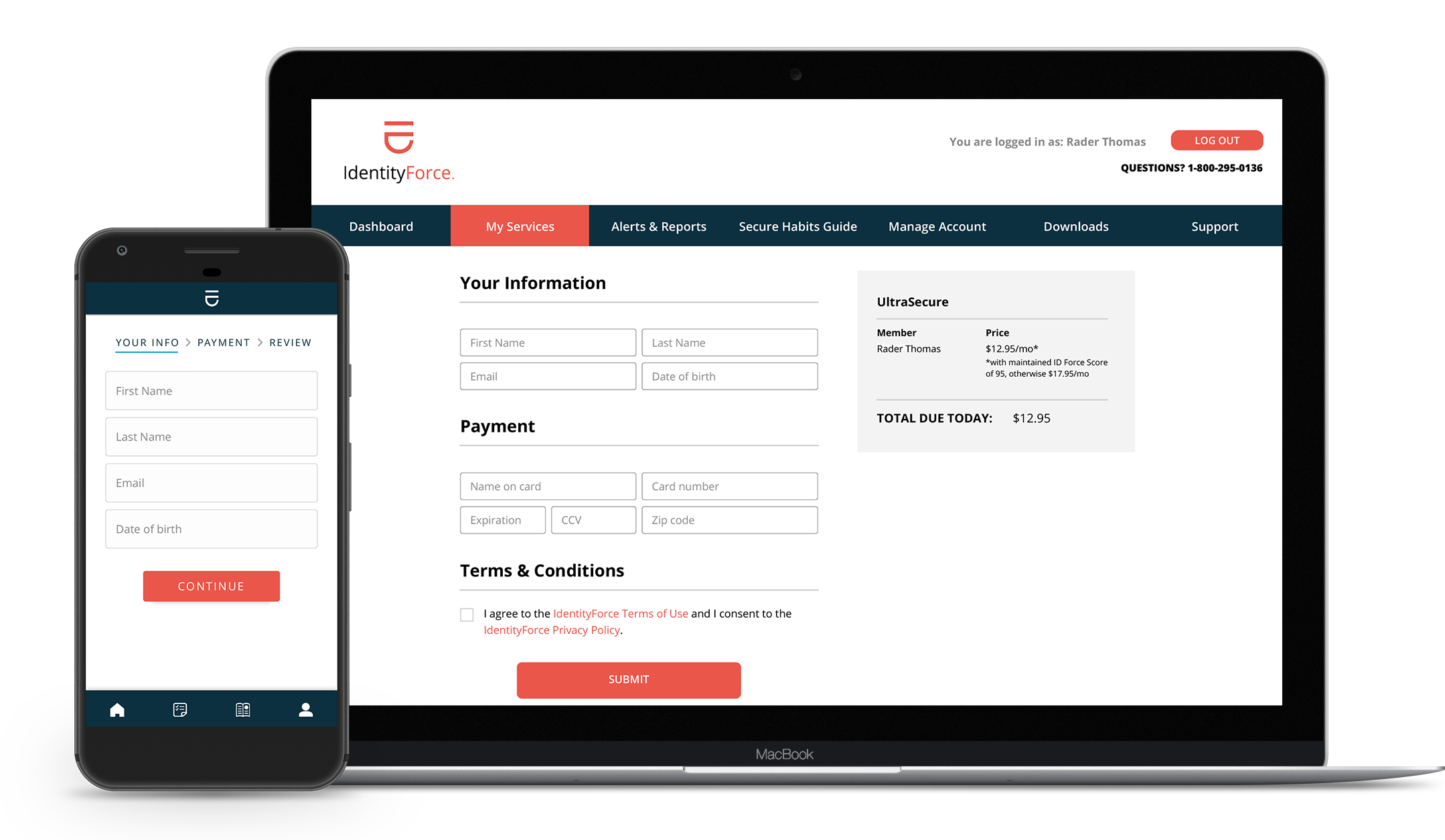 Since this was a conceptual project, I would have been eager to fully flesh out the ID Force Score Quiz and release it to see if it helped improve conversion to packages or engagement with their app and website. I'd also like to better outline the requirements how task completion on the Secure Habits Guide correlates with a user's score, ensuring that it's providing the right incentive to maintain healthy security habits.